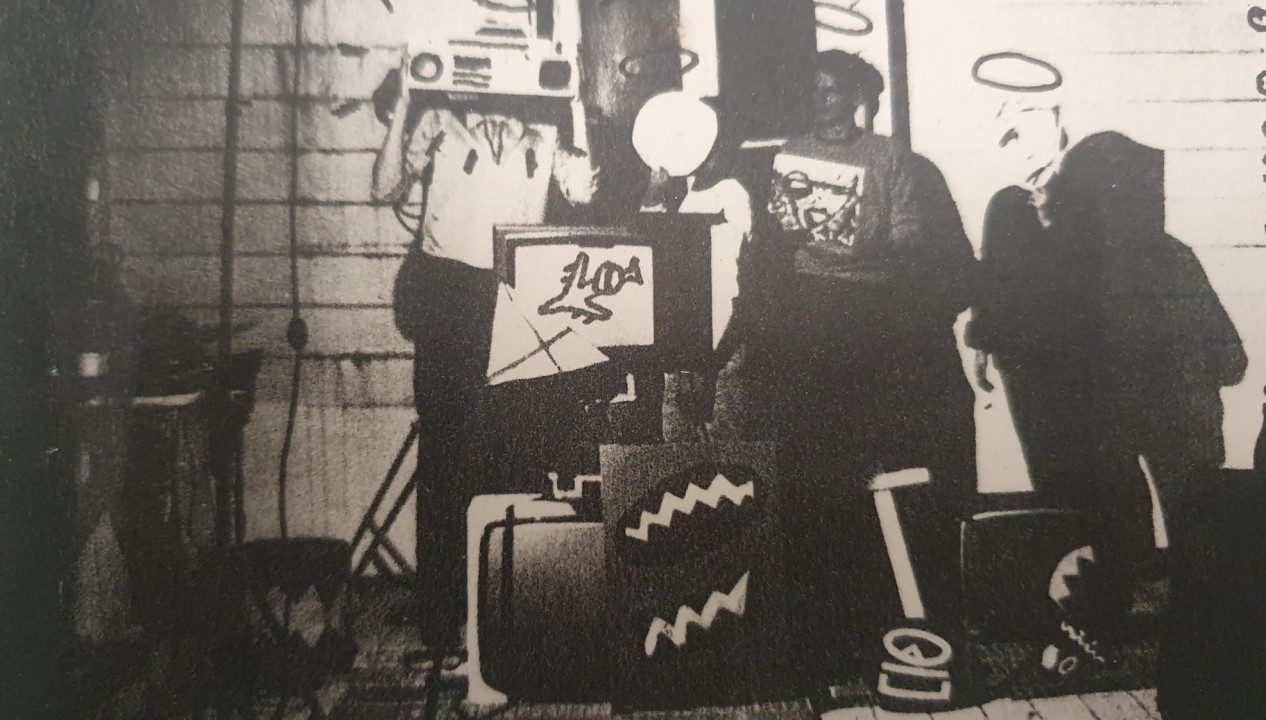 Kees de Groot is an autonomous artist, the Creative Director of PLANETART, and the mastermind behind the GOGBOT Festival, a yearly festival which brings together all the alternative scenes of the Netherlands in Enschede. For 2022’s PLANETART Archives, Lars van der Miesen will follow Kees for a whole year to get a better idea of the artistic- and societal revolution in which Kees took part and which spread simultaneously across the world. In a series of blogs, events, and weekly archive dumps on the PLANETART Instagram, a volatile mixture of fear, enthusiasm and creativity comes together in this story. Fear for the rise of capitalism, fear for increasing political instability and the threat of automation, but also hunger for progress and its infinite new possibilities; with the rise of inventions such as the drum machine, the video synthesizer, and not much later, the Internet.

In this first blog we find Lars and Kees in Kees’ office to unpack the story that began in the year of 1979 when Kees started his art studies at the AKI in Enschede.

Lars: So Kees, from 1979 until 1984 you studied at the AKI and found yourself in the midst of a storm of different developments. Could you say a bit more about what happened then and what drove you?

Kees: I always see my time back then as divided into three central themes around which all of my activities were organized. At the academy, I researched all these different developments within the art world looking for inspiration. An extremely important thing in the scene back then was Andy Warhol’s Factory, which regarded a do-it-yourself attitude as thé most important one within art. Parallel to this, I looked at the experimental music and video acts of the time like Throbbing Gristle and Psychic TV, but even mainstream acts such as the Sex Pistols. Simultaneously, Germany saw the rise of the Neue Deutsche Welle, which was a music movement that incorporated drum machines and samples into songs with live singing and instrumentation. Coming from the punk and new wave movements that preceded it the NDW was greatly politically engaged, sporting band names such as Kosmonautentraum and Freiwilliche Selbstkontrolle. This German scene was a scene of all-rounders with musicians that also painted, performed, and built installations. Meanwhile in the Netherlands, Willem de Ridder used his radio channel as a kind of instrument and performance enabler, bringing together people from all over the country to host a collective concert of car horns and brake light flashes. Precisely this combination of do-it-yourself, punk, experiment, and multi-disciplinarity against the prevailing norm… that’s what I decided to do.

”That perfectly summarized our activities of the time, namely the scanning of all of these signals that came to us in rapid-fire.”

The second theme that really inspired me was the group of artists that then started experimenting with electronics which suddenly became widely available on the market. These were the synthesizers, video synthesizers, and portable video packs. The latter were also available for students at the academy, and we often took them for a spin. We would hop into my Opel Kadett – ‘we’ being Ron Sluik, Emile Toorop, Rob van Wijngaarden, and me – and take a portable video pack to Pernis (a village near Rotterdam that was home to multiple of Shell’s oil refineries) to shoot our videos in this chemical science-fiction world. We would shoot black-and-white videos and manipulated and distorted them by editing the negatives. This was such a different world than that one made by the painter or sculpturer. Those previously static works now came to life in movement and sound, via new scientific, industrial means. After a trip to Pernis we’d go into the studio to experiment with those first synthesizers and drum computers, bringing that do-it-yourself attitude. This is how our first performances were born. Our band was named Opel Kadett. I can still see the posters hanging on the walls of the AKI. We would arrange a gig in Jazzcafé de Tor, and show Xerox propaganda videos (Xerox is one of the industrial giants of printing services). Our 4-headed band performed with synths, drum machines, and crazy distorted voice-effects, standing on the stage like futuristic Kraftwerkian robots.

Eventually we started touring, and renamed ourselves Auto AWAC; AWAC stands for Airborne early Warning and Control. This is an airplane with a massive satellite on its roof that is still used by the military today as a flying radar post. That device perfectly summarized our activities of the time, namely the scanning of all of these signals that came to us in rapid fire.

”…this robotic yet human heartbeat that seemed especially made to dance to, was a type of technology-human connection that machines so perfectly translated.”

Lars: and how did you relate to these different signals? Were you not overwhelmed by all of the events?

Kees: we had mixed feelings about it. On the one hand we were fascinated by the opportunities presented to us by technology. At that time we didn’t even know of the revolution that was to come not much later in the form of the internet. Additionally, we would have never expected to see all of our cassettes and video tapes made obsolete by the coming of digital sample machines. In that time we regarded ourselves as a type of techno-researchers, hungry for all the new possibilities. On the other hand, we also saw very well that this would mean a lot for the future. It was a time of massive and rapid change, all tied closely together and unravelling more quickly than we could keep up with. It was scary.

I still remember the DJ’s in Chicago producing the very first beats. And precisely these beats, this robotic yet human heartbeat that seemed especially made to dance to, was a type of technology-human connection that machines so perfectly translated. It was definitely a revolution waiting to be happening and we felt like its pioneers.

In the next installment of this blog, Kees shares the last of three central themes defining for his career, namely the growing political unrest that prompted artists to take a stance on the global matters of the time. Building on the legacy of punk and all things that might have been deemed rebellious by the status quo, Kees became part of a globally expanding movement that took action to give voice to their increasing concern.