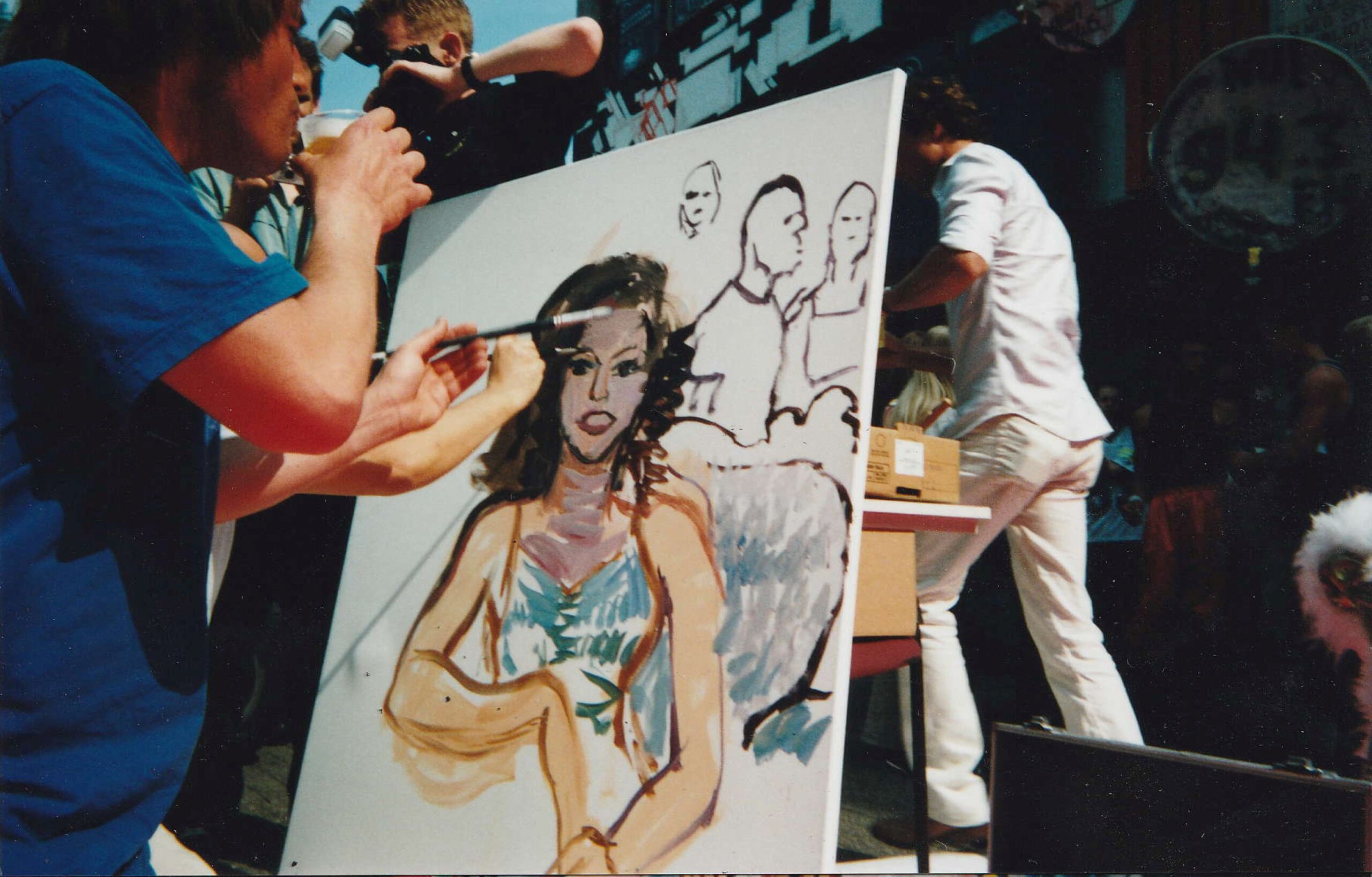 With the 2000s consisting of a steady stream of impactful events for PLANETART, this iteration is chockfull of spectacle. One of the defining events of this era was the opening of the social service building in Enschede that enabled PLANETART to become the creative breeding ground that it secretly had always wanted to be. It transformed PLANETART into an institution that enabled its collaborators to do whatever, whenever they wanted to basically. It mattered very little what type of art was being made; PLANETART (and take extra heed of the name in this context) could find a stage for it and incorporate it into its world of activism and critique. And what better example of this than the opening of the social service building itself? Where an array of contemporary art forms came to the fore: street art, media-art, street dance, and with an essential role given just as well to the classical art form of painting. The philosophy of PLANETART was clearly one of radical openness. It was able to absorb anything into its absurd, total world. This explained perfectly the positivity and future-orientedness that was at the basis of PLANETART’s great success. The Crazy Car Parade in Hengelo, is another excellent example of this.

Kees: Before PLANETART moved to Enschede we organized most of our activities in Hengelo; either in the Bathhouse, or in my relatively small studio across from there. However, on the Wilmink Square right in the center of Enschede the social service building had been out of use for a considerable amount of time. This was a large office building, five floors high, consisting in hundreds of small office spaces and a gigantic basement. It wasn’t that long ago that civil service still processed hundreds of administrative requests here on a daily basis. Considering the terrific growth of PLANETART, and her ambition to house as many different artforms as possible under one roof, this building was a great opportunity. Getting it turned out not to be so hard. I contacted my acquaintances at the municipality and not long after received the key to the building in 2003. This was of course reason for a renovation and a party.

‘’The day started out very special with Miss Holland of that year arriving at the event, seated on the back of a pick-up truck under a parasol on a huge sofa. It was up to Peter Klashorst to make a live portrait of her during the day.’’

During the opening I created a collective space for different artforms. There were many artists who now feature in the collections of some of the best museums that the world has to offer, such as Erik van Lieshout, Joep van Liefland, and Peter Klashorst. The Wilmink Square hosted graffiti art, and street dance, and Def P of the Osdorp Posse even came to paint. All of this while inside the building people were busy renovating, demolishing, and pimping all of the offices. Also, the day started out very special with Miss Holland of that year arriving at the event, seated on the back of a pick-up truck under a parasol on a huge sofa. It was up to Peter Klashorst to make a live portrait of her during the day.  Furthermore, this event had the honor of contributing to a piece of international art history. Nobody less than The London Police were assigned to put the largest mural on the newly acquired building. Their style was characterized by gigantic white figures whom they called The Lads. These lads made every building into a frivolous, pleasant spectacle. Back then, the London Police were still relatively unknown graffiti artists, but after their visit to us Chaz Barrison – he paints The Lads – and Bob Gibson – responsible for the decorum – were invited to almost every major city of the world to provide it with a mural.

Another event that set the tone for this new PLANETART age was the Crazy Car Parade of 2001, during the Night of Hengelo. The Night of Hengelo was a cycling event that drew thousands of cycling fans, but was good for the visitors of its parade just as well. During the break in between rounds, a huge caravan of vehicles would go through the city past all of the spectators. I was cheeky enough to call the organization and ask if they would be interested in PLANETART organizing the parade that year, and to my great surprise they agreed to it. To make this parade true to our style and identity we turned it into a huge DIY-event. We bought cheap caravans and cars from all over the country and put these on the central square in Hengelo to receive a make-over. A cast of artists, car mechanics, and volunteers started in the early morning and worked until the very last minutes before the parade un the vehicles, under the observing eye of all the inhabitants of Hengelo. Here again, it was important to showcase the contemporary artworld that was the core of our DIY-culture, so during the day we had a packed program with graffiti art, street dance, and music that drew a lot of attention. However, most of the attention went to the increasingly radical vehicles that were being transformed in front of everybody’s eyes. These varied from cute 2CV’s sporting orange dots and armed with confetti spewing abilities, to ’big hot sex caravans’ with an interior meant to support nights of a more intimate setting…

‘’The spectators were absolutely flabbergasted when they saw Conijn representing our collective. A little less when he finished as one of the last all the while drinking beer on his bike.’’

An event that combined cars and bikes was of course a natural magnet for autonomous artist Joost Conijn. He was a colleague that I got acquainted with via the Sandberg Institute. His work combined the production of vehicles on the intersection between technology and art, with adventure and exploration. Conijn has made many a vehicle ranging from cars to planes that he used to travel to, among other countries, Morocco and even Kenya. When I asked him to join the event I had thus expected that he would accompany the pimping crew on the square to contribute to the parade. However, Conijn himself saw things differently. He decided to use his brother’s cycling permit to secretly join the cycling round. Under the name of his brother he infiltrated the contest to battle for the honor of PLANETART, even sporting a custom-made PLANETART cycling shirt. The spectators were absolutely flabbergasted when they saw Conijn representing our collective. A little less when he finished as one of the last all the while drinking beer on his bike.

Well, readers that was it already: our very last article of the year for the PLANETART Archives. In January we will be finishing up the fantastic pre-GOGBOT era of Kees de Groot and PLANETART and shift our focus to the festival that yearly transforms Enschede into a bulwark of tech, art, and experimental music.