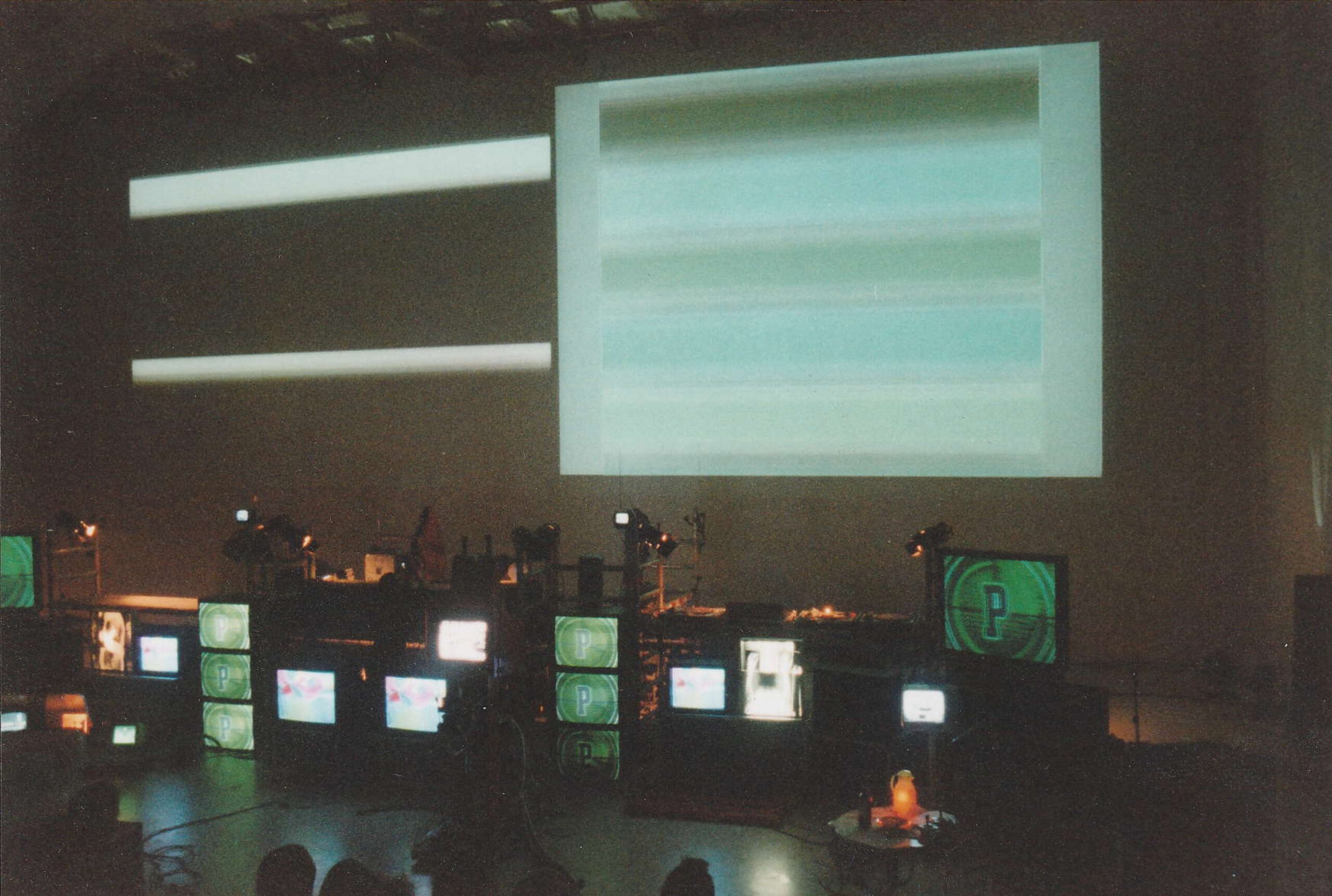 From the beginning of the 21st century PLANETART experiences an unprecedent growth. A series of large-scale events is brought to Amsterdam, Enschede and all cities in between. In the year 2000 for example, when PLANETART is given the largest hall of the Melkweg during the WorldWide VideoFestival, and transforms it into a dystopian construction site with thousands of screens and projectors. This is followed up by 2001’s Pimp! Arena; an entire day of video-art and veejaying in W139, fully documented by the German NDR. All of this culminated in PLANETART’s take-over of the social service building of Enschede, which was opened with a spectacular event featuring the London Police and many artists who have risen to (inter)national fame: Erik van Lieshout, Peter Klashorst, Joep van Liefland. In the meantime, Kees’ role in the bigger picture is also changing. Where first he was primarily an artist who provided artworks for the various exhibitions that he was invited to, he now starts to relay his activities towards facilitating and organizing for all the artists that Dutch DIY-culture has to offer. How did this change come about and what explains the enormous explosion of activities that was so characteristic for PLANETART at the beginning of the new century? To understand this, we have to take a look at the importance of the do-it-yourself attitude that was a quintessential part of the Dutch artworld.

Lars: So Kees, from the year 2000 onwards, PLANETART suddenly becomes a big player in the field of art events, and a trendsetter when it comes to curation and organization. At the same time, your role as an artist shrinks, and changes into something else entirely. How did this come to be?

Kees: In the 80s of the previous era, the Dutch artworld was still dominated by the commercial galleries with just one or two alternative institutions here and there. Consider Torch Gallery and Galerie D’eendt, both situated in Amsterdam, and both having featured my work in the past. This limited considerably the amount of alternative art that was provided to the public, which was consistently kept out of the halls of the bigger galleries. Despite all of this, I found myself surrounded by highly talented colleagues who made such alternative arts. During my period as a student, I was already constantly involved in a large network of exchange and collaboration with other artists. The do-it-yourself attitude was part and parcel of this. Think back to those punk nights in the Innocent in Hengelo; the music releases, the fanzines, and the performances were all done through these autonomous, intercontinental networks from which we got a highly diverse selection of bands to play in that tiny building in Hengelo.

And there were more collectives in the Netherlands that started using these formats. Squatting and organizing illegal parties became a national phenomenon, also influenced by the autonomy that came with genres like punk and industrial music. It became a sort of blueprint for the arts in general. In the 90s, this movement was so substantial that it became a strong competition for the established art institutions. It was then that Jos Houweling decided to bring these movements together under the banner of a big manifestation which was of course, as already discussed, Niet de Kunstvlaai. Here, all the art that was too alternative for the KunstRai found its rightful place among the abandoned industrial buildings of the Westergasfabriek. It was also on this manifestation that art collectives for the first time raised a national voice for the alternative arts, but this wasn’t all for PLANETART. In 1995 I started renting an atelier in an old school building straight across from the bathhouse in Hengelo. Once a month on the saturday – and back then this was still quite unique – I hosted an evening full of art that started with a presentation by one or more artists, followed by a performance or exhibition, and a party with DJ ánd VJ as a closer. This combination of music, club culture and art arose here on the smallest of scales in my classroom in 1995. That was the cornerstone of PLANETART as an art initiative and the natural result of years of networking and collaboration outside of the established galleries. From that moment on, my role changed as well. I went from someone who primarily made art, to someone who primarily facilitated it. This change was also the beginning of a huge influx of assignments, events, and activities.

It was also because of this that the WorldWide VideoFestival trusted us with the biggest hall in the Melkweg, where we created a jungle of scaffolds and other constructions, combined with thousands of screens that nearly sent our visitors into a psychosis. We called it the 200.000 Volts Trash Lab, and it functioned as a background for a strong arsenal of experimental performances, including ones from the fckn’bsrds, René Bosma, and Blank & Jeron.

‘’The NDR was so impressed by this that they decided to do a documentary on veejaying starring PLANETART as the protagonist. The ‘stage’  of that event was a big arena where VJs battled each other with the most outlandish projections.’’

It was clear: our specialization was video-art on the intersections of entertainment and performance, and this was a big hit with the public. Wat started in Innocent in Hengelo and in my small classroom atelier was able to compete with the official channels of the art world. We were on the frontline of veejaying and holistic art programs, all the while operating from the humble region of Twente. Our success wasn’t merely thanks to our strong network. Art in general become more democratized, also due to the incredible growth of communication. Back then, despite my strong doubts about the increasing consumerism of the new generations, I invested a lot of energy in providing a stage for all the young, innovative artists that came from the academies. Where my generational peers dramatically declared ‘the death of art’, I embraced its fusion with the popular media. It was clear to me that the new guard also understood art as a Gesamtkunstwerk; providing a complete experience where objects, sounds, and space meld into one. Popular culture and entertainment were part and parcel of this and did not in any way impede on the artistic value of the complex environments that we created during our manifestations.

The NDR, which was a public broadcasting station from the North of Germany, saw it similarly. This lead to the Pimp! Arena, organized in W139 in 2001. We were then already going across the whole country to spread the holistic concept that was born in my atelier. Arno Coenen and the C Men always joined us on these crusades. They brought clunky metal cases full of tapes and gear to adorn the evening with bric-à-brac imagery. The NDR was so impressed by this that they decided to do a documentary on veejaying starring PLANETART as the protagonist. The ‘stage’  of that event was a big arena where VJs battled each other with the most outlandish projections. I myself curated the art pieces for this event, which I spread across the arena like a set of theatre props and obstacles. The crowd was sat on a large scaffold, as one would see in the bigger talk show studios. From there sounded the amazement and enthusiasm that belongs to a real show – it almost had a gladiatorial atmosphere. Imagine them doing that in front of a painting, right? Now video-art and holistic environments are integral to almost any artistic evening, but back then it was still rare. It was also around this period that our success formula solidified into what PLANETART is now, and that lead to a timely change of surroundings. In 2003, we made ourselves at home in the  abandoned social service building in Enschede that became a creative breeding ground for artists across a broad range of disciplines.

Next time we cover the spectacular opening of the social service building by the London Police and Miss Holland, who arrived sitting on a pick-up truck under a parasol, like a true art piece. She proved to be a serious challenge for Peter Klashorst. Also on the menu: Joost Conijn infiltrates the cycling contest of the Night of Hengelo under the cover of a procession of pimped cars and Caravans, and Wilfried Houjebek confirms the suspicions of every Dutchmen who can think for their own: the Frisians are indeed aliens who have secretly taken over our most northern province. All calculations confirm this.